Technology has taken huge leaps in the more than 50 years since the original Star Trek television series debuted and today we can find once-futuristic devices like automatic sliding doors, wireless tablet computers and voice recognition technology all around us.

In 1966, Gene Roddenberry's Star Trek series introduced us to the fantastic concepts of warp drive, transporters, phasers, tractor beams and impulse engines at a time when computers filled entire rooms, telephones were tethered by cords and man had not yet set foot on the moon.

In his new book “Treknology: The Science of Star Trek from Tricorders to Warp Drive,” Pacific Northwest author Ethan Siegel dives into the real science behind the history of the fictional, future technologies of the Star Trek universe/franchise — including all the movies and spin-off TV series — and how many of these futuristic ideas have already become reality.

Siegel uses his knowledge as an astrophysicist to explain how our current understanding of the constraints of the speed of light preclude the ability to travel at warp speed, communicate by subspace and use beams to transport objects and people across great distances. Without these future discoveries, he explains that interstellar space travel would be a generational endeavor.

Set in the century after the first Star Trek TV series, Star Trek: The Next Generation introduced audiences to the futuristic ideas of androids, replicators, cybernetic implants, holograms, universal translators and synthehol. Siegel explains how close we have come to realizing some of these advances with the development of 3D printers, humanoid robots, pacemaker implants, prosthetics, touch-screen interfaces, language translating software and interactive holographic displays, but we are still a long way from realizing concepts like phasers, tractor beams and photon torpedos due to the extremely large amount of energy required for those devices.

“Treknology” is a great hardcover coffee table book and conversation piece with 216 glossy color pages filled with beautiful archival photos from the films and television series, prop photos, scientific formulas and stock images that are a pleasure to peruse on their own. Siegel’s descriptions and explanations typically start out in simple layman’s terms and grow increasingly complex and academic. This book is intended to appeal to a broad range of audiences, so if the scientific explanation in a particular chapter gets too complicated, readers can easily skip forward to the next chapter.

Created during the tumultuous 1960s, the original Star Trek series imagined a futuristic world where hunger, poverty, discrimination and war were ancient history and humanity had united with other humanoid races to create a peaceful federation of planets dedicated to science and exploration. While the first TV series lasted only three seasons, it inspired a new generation of scientists and other professionals to dream of a more tolerant world and work toward making this future a reality, one step at a time.

"Treknology: The Science of Star Trek from Tricorders to Warp Drive"

Treknology: The Science of Star Trek from Tricorders to Warp Drive 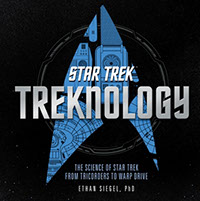